Since Christmas is right around the corner, PetsitUSA is going to have a contest for a $ 35 e-gift card to PetSmart.com.  The contest will run until Wednesday.  It will be close, but if you order right away, the product you order should arrive by the 24th…based on shipping speed.

Since Facebook technically doesn’t allow contests where you just ‘click’ like to enter, the contest is being held on the blog.  Just leave a comment saying what you think you’ll purchase if you win!  It can be a sentence or just a single word!

Yikes! Miley Cyrus’ Yorkie Was Killed by Her Bulldog

When Miley Cyrus’ dog died last Tuesday, she was devastated. Lila, a 2-year-old Maltese and Yorkshire Terrier cross, was one of the singer’s many dogs. She tweeted, “Can’t think of one good reason to get out of bed today … For everyone asking … I have never been so hurt in my life. My heart has never been so broken … Lila my sweet baby girl has passed away.”

She took solace in her other dogs: Ziggy, Floyd, Happy, and Mary Jane. She also often cares for her sister’s Yorkie, Penny Lane.

On Sunday, she dedicated her spot on VH1′s Diva concert series to Lila, according to the Daily Mail. She tweeted after the show, “Feeling connected to my baby girl Lila after tonight. I know she’s up in doggy heaven proud of her mommy for staying strong.” For the record, she performed Billy Idol’s “Rebel Yell.”

But one question remained: How did the dog die? An answer finally arrived via Miley's mother's blog Off the Record, in which Tish Cyrus keeps fans abreast of her famous family's doings.

She writes, "The way that Lila was taken from her was beyond terrible. Sometimes things happen that we just can't understand. Miley still isn't ready to talk about it, but I thought you guys should know what happened."

"For some unknown reason, Ziggy ... grabbed Lila. Not really sure if she was playing or what? She grabbed her in just the wrong spot and Lila didn't survive."

It appears that Ziggy, Miley's English Bulldog, fatally attacked the much smaller dog. We don't have details, but it seems to be another sad case of a "big dog-little dog" altercation, which are very common, according to our resident vet, Dr. Eric Barchas.

"A 'dustup' between a very large dog and a very small dog never ends well for the small dog," he writes in a recent Ask a Vet column. "These fights are common enough that they have their own veterinary acronym: BDLD (short for 'big dog-little dog')."

Tish stresses in her blog post that nobody thought Ziggy was a mean dog. After the attack, Miley took the dog to Spot rescue, Tish continues, where staffers were able to rehome the dog with someone who had no children or other pets, just in case the attack wasn't "a fluke."

In relaying the news, Tish ends up writing a fitting tribute to the bond between a dog and her human:

"Miley loved Lila more than anyone can imagine. I know some people were saying it's JUST a dog, but to Miley she was so much more. In Miley's life, as you can imagine, its hard to let many people into your tight circle of family and friends. Any time that Miley is sad or having a hard day, Lila was her angel, the one that always loved her unconditionally no matter what was going on in her life at that time. She would always just curl up in bed with Lila for a few hours and then everything would always feel better! She always made me feel better, too."

As for Miley, she's spending quality time with her other dogs. On Monday, she tweeted a photo of herself and Floyd, an Alaskan Klee Kai.

The Scoop | The Scoop

Dog friendly vacations – Before taking your pet with you ask yourself: what is in it for my pet?
Dog Food Blog | Best Dog Food Guide

Dog is my copilot Image by nikoretro
Sampson has been our buddy since 2004. In the winter of 2008, he suffered a severe perineal hernia that required a 00 surgery to repair it. At the time of the surgery, we were told that due to the severity of the hernia that it was likely to reoccur. As predicted, it has reoccurred and he desperately needs more surgery. Other than the hernia, he is a happy, healthy and active dog who should live to his mid to late teens. Therefore, I cannot in good conscience end his life prematurely. I have also contacted a Corgi rescue in hopes that he could be adopted to a family that is more financially able to care for him. However, since my husband and I can’t have children, giving him up for adoption because of health issues seems as ridiculous to us as giving up our 9 year old child for adoption because we can’t keep up with the medical expenses. So please consider donating whatever small amount you can to help keep Sampson with the family that loves him. Sampson, his Corgi buddies Shiloh & Rusty and his human family thank you! Click on the link below to go to Sampson’s ChipIn.com page to make your donation. THANK YOU!!
corgisampson.chipin.com/sampson-the-corgis-hernia-surgery… The Poodle (and Dog) Blog

Well it probably isn’t so much a camera hangover as an editing hangover.  It tends to happen after events.  I foolishly thought this past weekend’s event wouldn’t be as bad (in terms of a hangover) but it took me 6 days to feel the urge to pick up the camera again.  Part of that was lack of time, but mainly it was just not feeling like it.

But the event was worth  the hangover.  The pictures turned out great, we amazingly stayed on schedule and everyone seems happy.  We raised around $ 450 for the rescue and I’m pleased with that.  From conception to end (getting products out), it took 6 days – which is the way I like things.  Short and sweet.

You can see some of the pictures on the Paws on the Run Facebook page.  They aren’t in an album which makes referring back a bit of a pain but I can’t seem to figure out how to create an album after the fact.  Or at least I don’t have the patience to figure it out at the moment.

Most of the recent photos are from the event so you won’t have too much scrolling to do if you want to go see them.

Yesterday we went out to our favourite walking place.  I have a client session there today and I wanted to make sure things were still nice out there.  I’m glad I went.  There isn’t much beach left!  Most of it is covered by hard, wind blown snow but we made the most of the patch of sand we found. 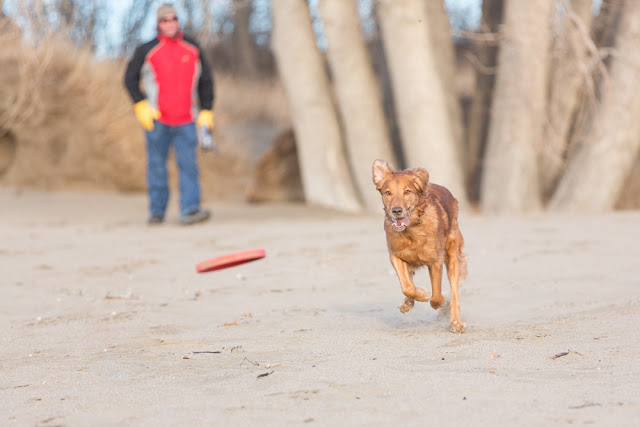 Coulee only got a few throws of the Frisbee but we both made the most of them. 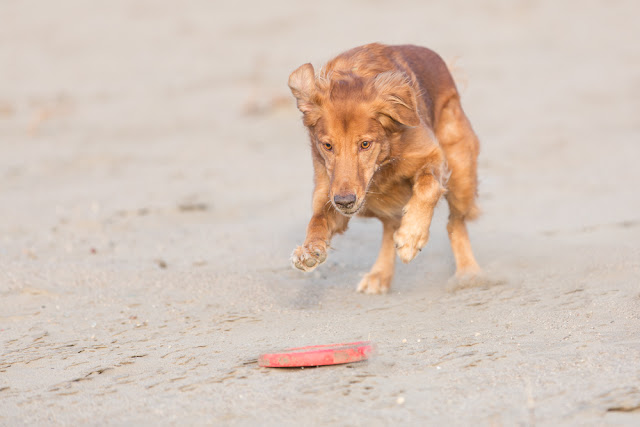 If should could dial back her enthusiasm a little bit, she might be able to handle a few more tosses but she is an all or nothing kind of girl. 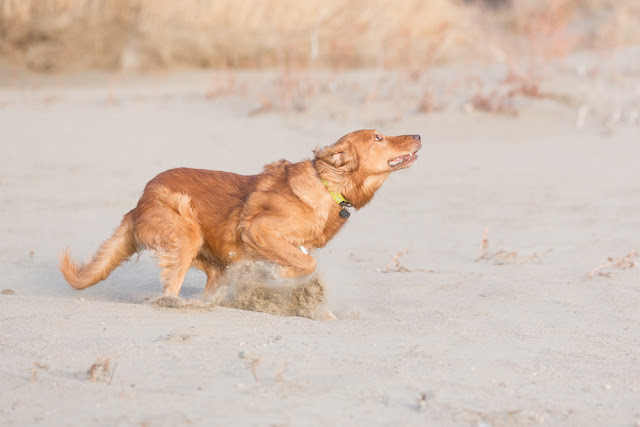 It was the first time this year I was under-dressed for the weather. It was only supposed to be -1 C but it was sooo windy and sooo cold.  My fingers were freezing and even my thighs were numb despite the lined, windproof pants I was wearing. I’ll definitely be dressing a little warmer for today’s session! 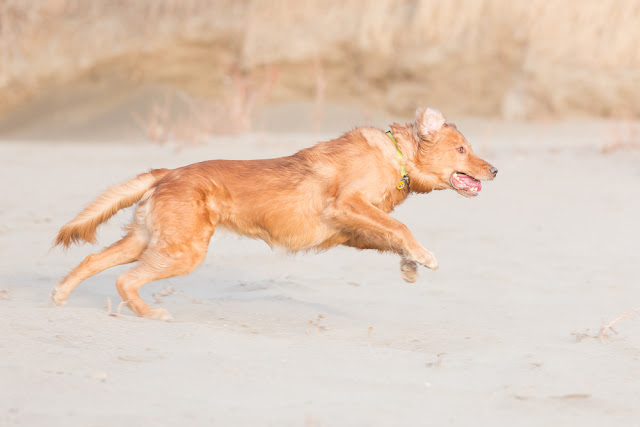 8 Tips For Traveling With Your Dog

8 Tips For Traveling With Your Dog

Just because you have a dog doesn’t mean you have to stay home all the time.  If you plan ahead and take a little care, it is easy and fun to travel with your dog.

Here are some tips to make the trip easier on both you and your pet:

1.    Get your dog used to riding in the car by taking him on short trips.  Go to fun places like the dog park, the fast food drive through (where you can feed him bits of meat from your burger), or to visit friends.  You want him to think that trips in the car are fun.  You don’t want your dog to think that all car trips end up at the vet’s office.

2.    If your dog tends to get carsick, don’t feed him the morning of the trip.  Having your dog travel with an empty stomach will help to prevent any car sickness.

3.    Bring plenty of water and a water dish along.  You will need to give your dog periodic drinks of water when you stop for a rest.  It will be easier to get your dog to drink if it is familiar water from home.  Water in different places often smells or tastes differently, and your dog may not want to drink it.

5.    If your dog uses a crate, bring that along too.  If you don’t have a large vehicle, you can buy crates that fold up.  When you get to your destination, you can put your dog in his crate while you go somewhere that you can’t bring him along.

6.    How should your dog travel in the car?  Some dogs like to sit or lay on the seat, so bring a blanket to protect the upholstery.  Other dogs may need to be kept in a crate in the car.  Be sure the crate can’t slide around and scare the dog while you’re driving.   You can also purchase dog seat belts to keep your dog safe while sitting in the car.

7.    Make a stop every few hours to walk your dog and give him some water.  Some dogs are frightened by the noisy trucks driving by, so try to walk in a quiet area.  Be a good citizen and bring plastic bags along to pick up the mess.

The first trip will be the hardest, because your dog will not realize that you are coming back.  With the first trip behind you, if you have taken the time to make sure it is pleasant for your dog, future traveling with your dog should be a breeze.

Q&A: Will 3 goldfish be enough to feed beneficial bacteria in a 55 gallon tank?

Answer by Jessica M
If it’s goldfish it more than likely will be enough wastes considering how much they poop.

If you want you can put 1 more goldfish in there if you like.

What do you think? Answer below!

Friday Funny: Give Friday a Paw

Many pet owners have been concerned about the dog treats they are giving their pets.  The jerky dog treats made in China are especially troubling, but the Food and Drug Administration has not yet issued a recall.  Thousands of people have contacted the FDA with their concerns about the jerky treats because they believe their dogs have gotten sick after eating the products.  The controversy surrounding the jerky treats has been going on for years, but you can now see some of the documents from the investigation online.  You can find links to the inspection reports on 4 of the 5 Chinese plants inspected by the FDA.  The investigation continues, but the fact that there hasn’t been an official recall has not stopped pet owners from buying the products.  Many people are   pushing retailers to stop selling the treats.

You can read the article at ABC Action News.